The Social Community day 2019 under the motto “Wahrheit ohne Alterative” or “Truth without alternatives” (25.11.2019 in Cologne) began with introductions of two speakers.

The first one, Dr. Gerlach, who is the director of Grimme Institute, began by thanking the State Chancellery of North Rhine-Westphalia for their support of the institute and the event itself. The internet is a big communication room and can be used in different ways. It can strengthen democracy or strengthen the differences in the community, for example the rise of extremists or anti-Semitic views.

One of the things Grimme Institute is dealing with is the role of traditional media in the modern day. Another aspect is how to find the truth and be transparent.

Mr. André Spang from the State Chancellery of North Rhine-Westphalia started with a pop quiz testing the audience about their ability of distinguishing fake news from none. It was in identifying whether the different quotes are true or not. The answers of the audience were given on the screen and it showed a lot of diversity. This shows how it’s easy to trick the public in believing fake quotes or news. The best three in the quiz were acknowledged and given rewards.

“Was it eigentlich wahr?” or” what is exactly truth?” started Mr. Spang then his speech. Everyone in the society should has an obligation to other members of the society to be speak only true news and not fake.

What are the main challenges the media and journalists are facing today? How does disinformation influence the media sphere and the audience? Can the situation be improved? How does it change the journalistic education? These and other questions were discussed by a team of six experts during the panel “Werte & Prinzipen” on November 25.

The truth is in danger – this is a statement the panel experts agreed on. The founder of the Podcast-Format Rice&Shine Minh Thu Tran believes that fast news reporting is one of the reasons why the facts are not always checked properly – there is no time for that. The world reporter Thomas Franke agrees: although the truth has always been in danger, today new forms of distribution bring new challenges. To change the situation, journalists have to understand their profession better and learn how to detect false information.

The next step they agreed on will be to develop the media competency of the audience and teach them how to differentiate between real journalism and propaganda. Charlotte Gnändiger, acting director of ARD Morgenmagazin, explains that it is important to educate the audience that there can be controversial opinions on the same topic and that opinions aren’t facts. Many people believe that if they find a piece of news on Youtube or Facebook by themselves, it makes this news reliable. “I have found it by myself” (“Das habe ich selbst gefunden”) is the main argument they use.

Another challenge for journalists in the new epoch is presenting topics in a balanced way. A good example is a representation of climate change in the media. When 99% of scientists state that climate change exists and only 1% is denying it, that 1% cannot have a voice in the media. But this is different in the social networks where everybody can participate. To fight disinformation, expert opinions should appear on the same platforms the audience usually use, says Charlotte Gnändiger. This idea – to provide fact-based information in social media – is already being utilized by Paul Schule, who is developing a Youtube channel called Ultralativ. His experience shows that the audience is mostly not aware of how Youtube can manipulate and disinform their users.

A solution could be found if editorial departments became more diverse, agree Minh Thu Tran and Leonhard Ottinger from RTL-Journalistenschule. But how should a perfect editorial department look like? Transparency is one of the crucial factors that influence the quality of media production, says Cristina Helberg, a fact-checker from Correctiv. In her opinion, every journalist should remember that not all reports from agencies should be trusted. Correctiv has a whole list of the websites that are considered unreliable. According to Cristina, the experience of the Correctiv is unique, because, unlike many other publishers, they give priority to proving the facts.

The experts share the opinion that media education should start at school. But to make it possible, it’s necessary to first bring this topic on the level of the educational policy, says Paul Schule. Unfortunately, up until today, there haven’t been much done to implement this idea. Thomas Franke recollects that media competence was discussed yet at the end of the 80-s, and since then not much has changed.

For now, there is no solution to be prescribed in order to protect the truth in the media. The experts describe the situation as complicated.

Underpinning Truth in New Formats and Methods
An ever-changing media landscape calls for the discussion of media methods and formats that promote the truth. As part of Social Community Day 2019 in Köln, renowned medıa professionals gathered to present their experiences as representatıves of various audience-oriented platforms and projects ın Germany. Fact-checking, a growing number of citizen-journalists, and transparency were some of the trends discussed.

Citizens as Journalists
Cordt Schnibben, founder of digital journalism school Reporterfabrik highlighted the need for traditional and social media to work together. He said the project offers a series of courses aimed at journalists, semi-journalists and interested citizens. “Today citizens are also bloggers,” he added.

Transparency
Johannes Fılous, founder of street-oriented media project Strassengezwitscher, told the audience that it is important for media professionals to work with clear standards and always double-check the facts. “Transparency is important as people want to know where decisions were taken, and sources must be more available.” Dennis Leifels from Y-Kollektiv underlined the importance of observing the standards of journalistic work. He pointed out the need for more trained journalists active in Youtube to follow these standards.

Attract Attention Through Fact-Checking
According to Thomas Laschyk, founder of fact-checking project Volksversetzer, it is essential to find a way to develop methods in order to attract attentıon through fact-checking. The project has shifted its attention from only working with bystanders to also focusing on people documenting events.

Inspiring Through Data Journalism
Data journalists Martina Schories and Sabrina Ebitsch work at the editorial department of Süddeutsche Zeitung. They want readers to have the necessary informatıon to elicit action ın specific issues. To achieve this, their projects aim to reach as many people as possible. For instance, they researched gender roles ın children books as well as climate change with the goal of promoting changes in behavior.

Ms. Schories is a programmer at Süddeutsche Zeitung (SZ). The book “Artificial unintelligence” is recommended for everyone want to learn about working and limits of technology and that machines are like humans make mistakes.

Storytelling team, how can they sell the story in the best way possible?

Then Ms. Schories talked about two projects that the SZ is working on.

SZ saved what is being said in the German Parliament in XML format and then use the information and analyses the data with different filters.

They analyzed how is the relationship to different party members to the wright wing for the example (Alternative für Deutschland) and how some other members don’t want to sit next to them for example.

SZ analyzed over 40,000 children’s books to see the different colors authors use when targeting boys or girls. And what are the 10 most used adjectives if the main character male or female is. At first they became not accurate information because the results did show which colors were used but it didn’t show the percentage of usage of these colors, so the results were similar. But then they changed the programming to show Datacamp.com which is a learning platform for professionals working with data was highly recommended by Ms. Ebtisch free programming.

The internet may be full of content, but stumbling upon interesting, non-mainstream media that unearth ground-breaking stories and bring taboo topics to the spotlight does not happen every day. Under the motto “Keine gestellte scheiße” (No Fake Crap), Y-Kollektiv is a German journalist network that was present at Social Community Day 2019 last Monday to present attendees with strategies to transform their ideas into films.

Journalist and Regisseur Alina Schulte, who has realised five films since she joined Y-Kollektiv in 2018, was the facilitator of the “Von der Idee zum Film” workshop. Trained in RTL’s journalist school, Schulte focuses on delivering in-depth, provocative reports over uncomfortable topics such as illiteracy, hybristophilia and sexism in everyday life.

Y-Kollektiv uses an innovative perspective when producing reportages. According to Schulte, the young journalists of this group aim for honesty rather than objectivity, transparent research and a humane approach. “Every form of journalism is subjective in principle and each journalist decides actively on topics, so we find it honest to convey this attitude,” she said.

Schulte described how reportage ideas evolve into concepts that can be produced as video content and examined ways to find perspectives for these media products. She divided the audience into three groups to brainstorm separately on “Topicality”, “Taboo Topics” and “Network Phenomena” and work on flipcharts. After 10 minutes, Schulte evaluated the creativity and originality of attendant’s ideas according to several criteria.

“How do you prepare the shot?”, “What perspective should we use for this topic?” and “Is there an insight into a microcosmos?” are only a few of the questions that participants had to ask themselves within their work groups. Through these discussions it was possible to assess the potential of each idea to become a realizable reportage that could be pitched for production. “

The workshop presented by Judith Kirberger from the Grimme-Akademie dealt with matters of hate speech and fake news. Kirberger began the workshop by showing personal examples of hate comments and personal insults she received on Facebook under the post of a BILD article.

The audience was then divided into groups of three and each group was asked to discuss the following different questions:

A quote from Meibauer was shown that defines online hate speech saying that it is “[. . .] the spoken expression of hate against persons or groups [. . .] especially through the use of expressions that serve to reduce and vilify communities.”

More reasons why people publish hate on the internet were presented. For example, some people have a desire to belong to a certain group that shares a common ideology, while others are simply driven by anger and negativity.

Kirberger showed a couple of tweets by President Donald Trump. His tweets appear to be offensive to two of the groups that Kirberger previously mentioned; refugees and people with disabilities. Audience members were encouraged to debate whether or not President Trump’s tweets categorize as hate speech.

Audience members were shown more pictures and ‘memes’ that display offensive language to groups of people, such as Muslims and refugees, and they were asked to provide with their views on the pictures, discussing whether or not they classify as hate speech.

Towards the end of the workshop, Kirberger explained the ways through which hate speech can be managed or handled. For example, private internet users should report criminal content or block the content if it is not criminal. Moreover, organisations and content moderators should encourage discussions or delete hate speech on their platforms, while giving reasons as to why the content has been deleted. 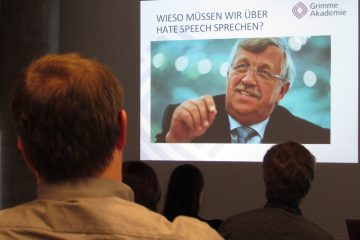 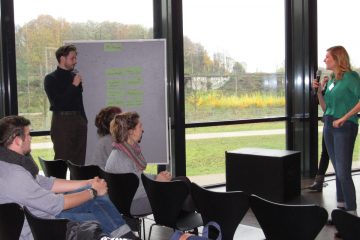 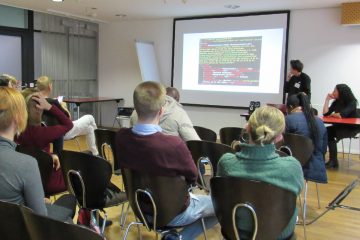